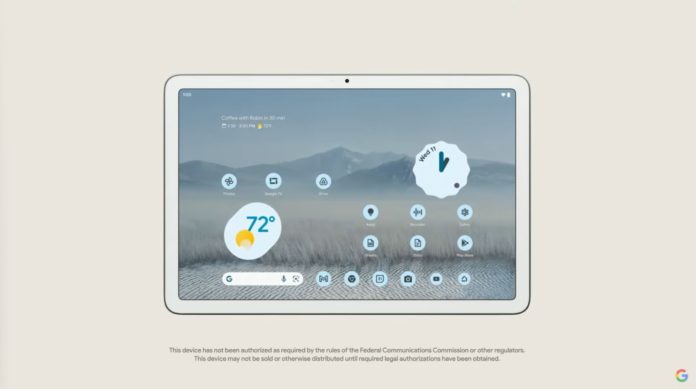 In a somewhat unexpected step, Google has officially confirmed that they are working on an Android Tablet for the Pixel family of devices. Unveiled officially on stage at Google IO 2022. The Tensor powered Pixel tablet is very light on details, or even a firm commitment to launch.

For those lamenting the fact that Google doesn’t have a cohesive hardware ecosystem, it might be time to find a new gripe, may I suggest the ills of social media? While details are short the tweet below shows off the overall look and feel, and we have to say, it feels more like a portable Nest hub than a Pixel Tablet.

Here’s a sneak peek at our upcoming Pixel tablet 👀

Rick Osterloh described the future tablet as a ‘Perfect companion to you Pixel Phone’, and with Android 13’s focus on larger screens, multitasking and cross-device integration it makes complete sense that Google has announced they are entering this market, even if the hardware is not going to be released until likely October 2023, I think that officially makes this tablet vapourware.

Snark and sarcasm aside this is exactly what we want to see Google doing, all they need to do now is release an updated pixel Chromebook that fits into this ecosystem and they can finally claim to have a fully integrated hardware and software strategy. All they have to do then is make it all work together!